A Voice for Girls from India to the USA 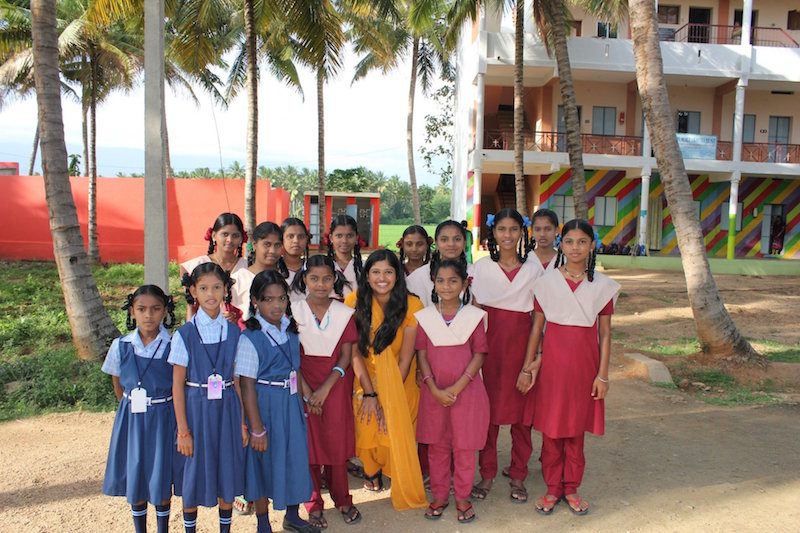 29 Mar A Voice for Girls from India to the USA

From Building a Computer Lab & Sewing Studio for an Orphanage in India, to Becoming a Teen Advisor for the United Nations Foundation

Every summer, my family would take a trip to India. On my birthday – August 15th – my entire family would pile into a gleaming white van that would carry us over bumpy dirt roads that wound for hours past the city limits, depositing us outside an orphanage called Udavam Karangal. We would spend what I liked to think of as my special day playing with the orphans, cooking with the volunteers and serving meals to the children. I remember hating the feeling of my salwar sticking to my sweaty body as I watched my special day waste away.

But year in and year out, we would make the same journey; we would see the same girls, braid each other’s hairs with the same sticky fingers, and laugh at shared jokes from our time together. I began to truly listen to their stories that differed so drastically from my own. Although I once felt like we were worlds apart, they actually were just like me: eager to see the world and ready for a future of growth and success. The only difference was the circumstances we were born into. I was given access to knowledge and resources. Most importantly, I had a steady support system that gave me the strength to break the ceilings people said I couldn’t break and open doors I didn’t even realize were closed.

It took many years for me to realize that the random chance that secured my future – just as it disadvantaged the orphans’ – was not an excuse for depriving anyone of the right to build their own future. It took even longer to realize that the easy solutions are never the ones that last. Pushing for real progress was more than a one-time donation or a sparse smattering of volunteer hours. The real work involved getting on the ground, and engaging in conversations unlike any I had ever had before. With this in mind, I began my first project: to build a computer lab and sewing studio for an orphanage in Madurai, India. Working with the orphanage and the local government showed me that structural change doesn’t come from the outside – it comes from the community itself driven by a desire for something more.

I was later selected to serve on the Teen Advisor Board for the United Nations Foundation because people were beginning to realize that in order to really change the lives of women around the world, it was time we stopped talking about them and started talking with them. This very phenomenon was demonstrated this past year when I was selected to represent the United States at the Girls20 Summit. The goal of this summit was to hold the G20 leaders accountable for increasing female labor force participation by fighting for things like paid maternity leave and equal pay for equal work. In presenting a final communique to the G20 leaders, we affirmed that our voices would not only draw attention to the problem, but be instrumental in the creation of a solution.

When I was asked to speak about my own advocacy at the Women Deliver conference in Copenhagen, I was taken aback by how far we have come since I started my first project. What began as my simple construction project in India was now on the way to becoming integrated into the government educational curriculum, and girls in the orphanage finally believed that they could create their own future. Despite the fact that I had been advocating for years, people were finally beginning to realize the strength of youth voices – that we are not the leaders of tomorrow, but rather the leaders of right now.

Certainly there were many times when people said No – I couldn’t do it. No – maybe when you’re older, no maybe when you have more experience. But my future and my impact wasn’t going to be defined by what other people thought. Rather, I continue to strive to show women everywhere that they too have the potential – all they need is someone to believe in them. These kinds of movements originate from all activists around the world with a passion and courage to fight for change. And in my experience, these are the movements that change the world.

Archana Somasegar is a junior studying Economics and Mind, Brain, and Behavior at Harvard University. She has had a long history of advocating for women’s rights around the world – from being the President of the Seattle Chapter of Circle of Women to her role as a Teen Advisor for the United Nations Foundation. Since then, she has been invited as a speaker for Microsoft’s Giving Campaign, and was selected to represent the United States at the 2015 Girls20 Summit which brought together a single girl from each G20 country to advise the G20 leaders on how to increase Female Labor Force Participation. She has written advocacy pieces for the United Nations Foundation, the Huffington Post, and the Women on Boards Campaigns. She was named a recipient for the 2016 Martha Foote Crow Award of Achievement and has been featured in Elle Magazine and Glitter Magazine for her work towards global female empowerment. Her interests outside of women’s advocacy work involve A Cappella singing, soccer, classical Indian Dance, and traveling.