In Conversation with Vivian Onano

25 May In Conversation with Vivian Onano

Here’s what young changemaker Vivian Onano has to say to young people about following passions, remembering community, and making a difference in 2017 and beyond.

If the term ‘old soul’ were still in vogue, twenty-something wunderkind Vivian Onano would be the bell of that ball. She has served as a Youth Advisor to the UN Women Global Civil Society Group, a Global Youth Ambassador for Water Aid, and was a keynote speaker at the UN General Assembly in 2015. Her wisdom clearly belies her years, and when she answers the phone at 5 a.m. for our interview, she is calmly sage about the whole thing: “I work better in the mornings” she sighs. “The sun is up; you can see more clearly everything you have to do.” She’s also funny and whip-smart, and so utterly thought-provoking that one would never hear a platitude fall from her lips. She is Vivian Onano. Advocate, leader, mentor, writer. And her soul— old and yet not— is right where it needs to be: standing shoulder to shoulder with innovative change-makers all over the world.

But first, a little bit of background. I had the pleasure of interviewing Onano through the Blessed to Give Foundation, from my membership in a wonderful organization called Girls20. Two years ago, I was the Canadian delegate at the Summit in Turkey where young female representatives learned and worked together to produce a communique, presented to G20 leaders, detailing our suggestions to aid in the empowerment of women. One of the points reads as follows:

Providing free wireless internet connection wherever government funds are used in existing or future rural and urban public spaces, to enable easier and affordable access to information that will allow for the development of skills and acquisition of knowledge for career advancement. 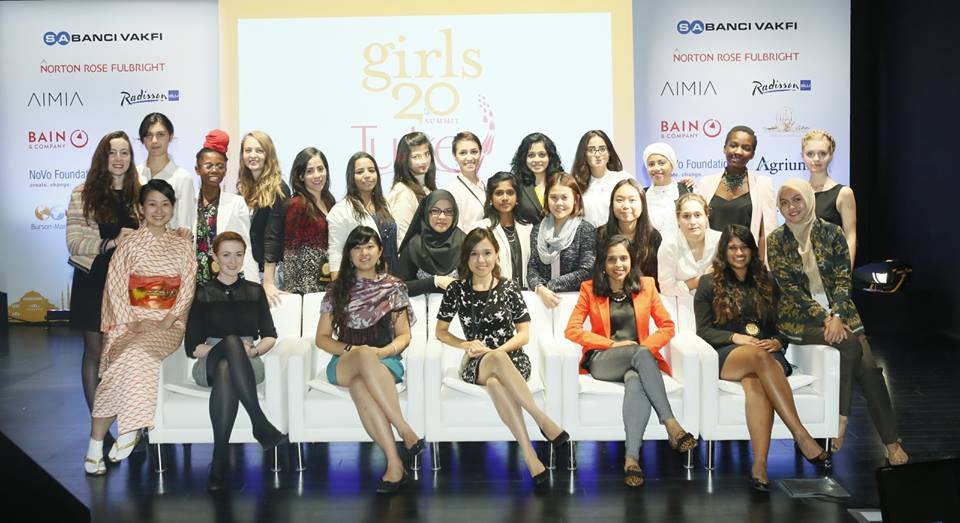 This hits close to home for Onano. Growing up in poverty as a young woman, she recognizes she didn’t have it easy. Yet Onano was lucky enough to be awarded a scholarship to Starehe Girls, one of Kenya’s top high schools, and from there she blossomed. “I draw a lot of inspiration from my background,” she says. “It was tough. I was disadvantaged in some ways; however I found strength there.” She remarks on the importance of such pushes to bring WiFi to rural areas, stressing for stories and knowledge to become more accessible. “Stories are how leaders are made.”

“Everything about where I grew up, everything I saw growing up, it strengthened me as an individual to be a leader and to appreciate life as it is and to have an impact and give back.”

For Onano, so much of making a global impact is dependent upon a knowledge of the self that is transformative and adaptive to change. “You have to always be in conversation with yourself, too” she adds. “Collaborate with yourself, get to know yourself. Ask yourself: what is it that is keeping me up at night?” Wise words, so early in the morning. “You have to know what exactly you are interested in. Development is broad, so broad, and you must do your research inside and outside of yourself. Is it employment, economic development? Are you passionate about ending child marriage? Improving health? What kind of health? Maternal? What about sustainable development? What do you know about the problems of the world, and what speaks to you? It’s very broad so you have to do your research and know what exactly you are passionate about. When you find it, you will know, trust me.”

“Your destiny?” I suggest.

“Exactly.” She laughs quietly. “I think we are born with certain talent, a drive, a possibility to do great things. If we listen to ourselves, we can manifest that possibility into great things. I think of myself as having been an activist from birth, starting with my family, with school.”

She takes a sip of water from a desk beside her, lost for a moment in thought. I wonder if she is imagining her younger self, a nursery-school girl from Kisumu who stood up for her peers and who spoke the truth as it was, insisting her cousins were entitled to an education and watching with tears in her eyes as they were forced to drop out to support their families.

“And then, what next? They just became a statistic. Nothing more was done. The unemployed youth, lacking access to education or civil engagement…they are my family also. I cannot be successful as an individual. I can only be successful if all of us are working together.”

I ask her, as we communicate from South Africa to San Francisco by way of the Eastern Time Zone, why collaboration, especially of the cross-cultural variety, matters to her.

“We, as young people, women and men, have a task. It is quite the task.”

“To achieve gender equality?” That’s what we are talking about, right?

“Yes, to achieve gender equality. For my mum, my grand-mum, everyone.”

Onano is, in her own words, the person she is because of her mother, her grandmother, her teachers and friends. It shows that when she speaks of abstract, often-lofty goals, that her heart is still on the ground with them. That even as she speaks to me half-way across the world over Skype, there is no electricity back home. This technological feat would not be possible.

“But of course the issue is more intersectional than that. Technology leaves us at an interesting crossroads, where we in the real world cannot yet keep up with the access that it affords us. We have to mobilize…” she pauses. “Decentralize information.”

This information, Onano believes, will help us engender gender equality.

“Technology has made it very easy for us to advocate both offline and online, share best practices and form synergies across continents. We must be creative and brave to show how gender parity will benefit all of humanity.”

And speaking of all of humanity, a great deal of us are young people.

She agrees readily. “Yes, yes, the world is a youthful place.”

“You gave a call to action demanding that youth representatives be included in all future gatherings at the General Assembly in 2015; what is your view on the value of getting youth involved in political advocacy?” 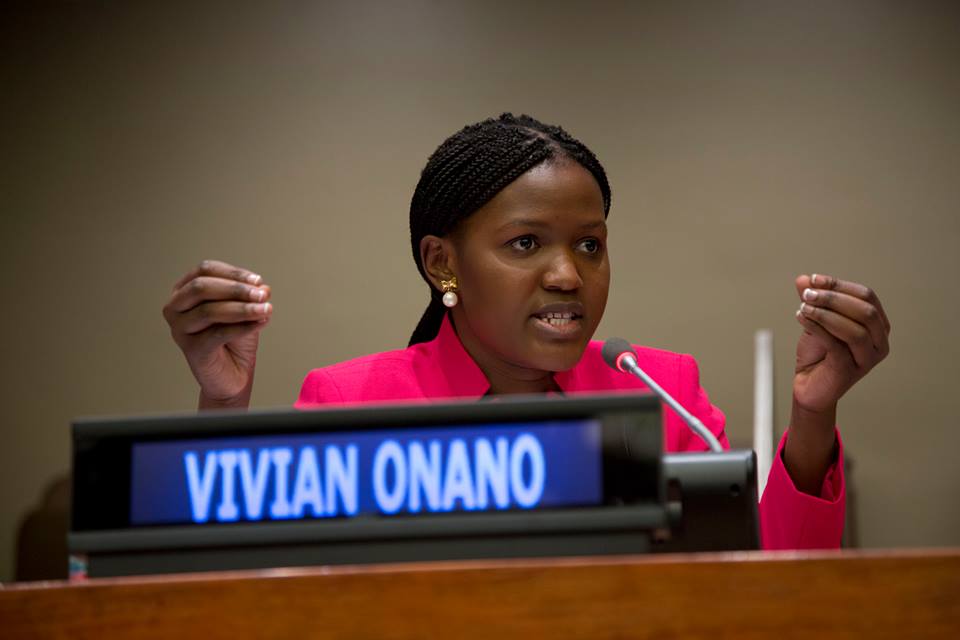 “You know, that was I think the best day of my life.” She beams as she says this, waves her hands a little. “I felt everything at once: nervous, happy, excited, scared. I will never forget that moment. But mostly, I felt like I was finally in a position to serve as a mentor, to get youth all over the world involved in advocacy. I would encourage first that all young girls find a mentor you can relate to. Mentorship is a two-way street, and I finally thought I was at that point in my life where I could inspire and be inspired by people around me in very concrete ways. Investing in youth is a commitment. It takes time and effort. But it pays off ten-fold.”

I ask her about when it doesn’t, and she is quick to talk about persevering through failure. “It’s very lonely, what I do. I think our greatest setback… the one thing that is holding us back the most as young activists, is that we work in silos.”

I ask her to elaborate.

“Silos, yes. We have been working in silos for very long. The statistics stay the same and nothing is done. We must be able to share stories of success and failure, and we must also be able to share resources. We fight over the same systems of funding and support for projects that could be taken global if only we realized the possibility of collaboration. We are limiting our own reach.”

Our window of time is closing, so we turn to questions of life-long advocacy. Onano emphasizes that making a powerful difference at individual and societal levels is something that encompasses much more than a one-off financial donation or volunteering experience, the kind that ease consciences or spice up CVs. Rather, she wants people to know that advocacy that is a life-long, evolving process that takes many different forms and takes inspiration from many different places, and that young people know this better than anyone.

Activism, for Onano, is sustained by partnerships. She is generous in her recognition of women and girls who inspire her. “Let’s see,” she exclaims, counting off on her fingers. “I can think of Joseph, and Josephine, Abisoye… all family, all committed to improving the life circumstances of humanity.” The people she lists off are experts in causes from the prevention of child marriage and FGM (female genital mutilation), to the creation of educational partnerships for refugees, migrants, and underserved communities that tackle access to technology.

To Onano, this is everything. “This is my Africa. Staying on the ground, staying and connecting, that’s how I make my passions matter. I am an optimist, I believe anything is possible, and by staying connected and inspiring other young people I can keep that alive. We as young people live these issues day to day, so no one is more knowledgeable, more solution-driven, than us.”

Through Onano’s SEED Project, she continues to stress the need for collaboration with governments, civil society organizations, and private and public sector institutions to empower youth throughout Africa. “It is through this collaboration that we have managed to expand our work from Senegal, to The Gambia, and now to Southern Africa.” To Onano, this is how we ensure longevity: intimacy with issues and populations, passion, transparency, and collaboration.

The last question is a topical one: If you were to write a guide for girls living in 2017, what would be the first piece of advice you would give them?

“First I would say to be optimistic. There is nothing anyone can do to take your compassion away. Where you come from— what you survive— does not determine your power. Only you can do that, only your stories and your knowledge and your strength.”

Her last thought before we say our goodbyes and do the joyful dance of promising to keep in touch, stays with me. For a woman who believes in philanthropy, she acknowledges that “most of the time we are always waiting for appreciation for what we do. Do good and go your way, it will speak for you in a hundred years from now better than any interview or address or approval.”

She logs off at 5:32am my time. I sit at my keyboard for a long time, simply breathing and taking in all that has been said. As the sun begins to climb through my open window, bringing in cold morning air, I set about making coffee. I have a class at 9 o’clock on the ethics of public service. Thanks to Vivian Onano, I have some talking points.

Eva Louise Grant is a sophomore at Stanford University, where she is an Iris Marion Young Scholar in Philosophy. She is a medical translator, the president of the Indigenous Feminist Collective, and a fellow at the Institue for Diversity in the Arts. She was the Canadian delegate to the Girls20 Summit in Istanbul, Turkey, in 2014.

Vivian Onano is a Global Youth Ambassador for Water Aid, a Youth Adviser to UN Women, a Young Leader at Women Deliver, a major activist at the ONE Campaign, and currently serves as the Partnerships Manager for SEED Project, despite only being in her early twenties. She was a keynote speaker at the UN General Assembly in 2015. In 2016 she won the MTV Africa Award under category ‘Africa Re-imagined’ for her relentless work as a youth advocate and leader, and Forbes has listed her as ‘One to Watch.’