As kids, those who have a literary interest tend to learn two things very quickly. First, that literature is a gate towards universes, concepts and also abstract, wonderful ideas that have the potential to deepen the understanding of our world and create empathy towards many, very different environments. Second, that literature is a solitary exercise. Or so I thought, until I came across spoken word poetry.

A tool that combines the written word with its rhythm and its theatricality, slam or spoken word poetry is a form that we have been teaching for about two years now in a project called Vomitando Conejitos (a bizarre name that can be translated to “throwing up bunnies”, which derives from a short story by Julio Cortázar). The project was founded with the mission of encouraging the production – but also socialization and performance – of poetry in different institutions where we felt voices existed that needed a channel to express themselves and to be heard. Strangely, we ended up having two main and somewhat similar demographics: secondary schools and mental institutions. Both are, we found, places where art was not a main subject in the curriculum, though wildly necessary.

In secondary schools, our seminars and workshops felt like some sort of historical reparation. By providing teenagers and kids with the tools to write and perform spoken word poetry, we thought firstly that we were spreading a great genre of art that we, late bloomers in spoken word poetry, were not lucky enough to receive at school. However, despite our naiveté – we were, at the time, all younger than 23 years old – we soon came to recognize that spoken word is more than a cool instrument to express yourself. Spoken word poetry allowed students to see that literature could be more than writing about the moon and its beauty using iambic pentameter, and that one could write about love and football and hate and politics and one’s favorite toothbrush and that those, too, are literary subjects: poetry, we came to see with our students, was not only a genre but a lense with which we could look at the world. And boy, we looked.

With teenagers we experienced writing poems through random words or arbitrary pages of the student’s favorite books, building stories about hypothetical time-machines or composing pieces entirely made of questions, false statements or deep truths. It was a playful, fun experience in which even the cool captain of the soccer team managed to express his everyday sufferings and school troubles while enduring the pressures of the ‘popular kid’. As Glee-like as it sounds, it was and continued to be a great challenging experience: teenagers, we found, tend to be much smarter and deeper than their teachers and parents credit them to be, and we felt privileged to witness all that can come out of their minds when they get to express themselves.

Our experience in mental institutions – mainly the psychiatric hospital “José T. Borda” – was, in my opinion, doubtlessly harder but equally important. For two years, we held a weekly workshop for patients who were healthy enough to partake in the activities of the cultural center inside the hospital. Though it is the biggest neuro-psychiatric institution in Buenos Aires, the Borda hospital represents a severe case of negligence by the state – its wards are old and poorly maintained, and patients have minimal space and suffer food scarcity. The lack of staff results in the healthier patients having to take care of those in a worse off state. Pills are stolen, drugs are wrongly prescribed and the cultural center, built out of an abandoned ward, was the subject of police abuse in the year 2013. 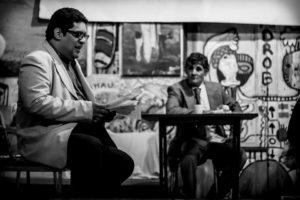 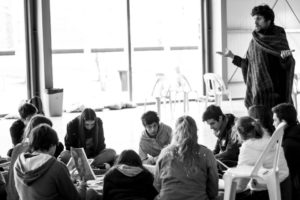 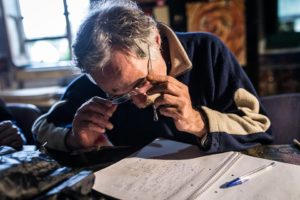 Despite – or due to – their obstacles, quality of living and the hard-to-hear stories that one can easily find at the Borda hospital, patients managed to turn up at our workshop every Friday, from 4 to 6 pm. The first day, we arrived with a well-thought plan of exercises, poems, topics to avoid and topics to evoke, in a similar manner as we would in secondary schools. However, mental patients proved to be much more unpredictable than moody teenagers: the first day, a man named Ricardo raised his hand to talk to us. He was writing an essay, he told us, about the fear of freedom and he wanted to hear our opinions. Soon there was a long debate around the subject and we decided to go with the flow: alright now, let’s write about freedom and fear.

Since then, we have been discussing, sharing and debating many abstract subjects and ideas. Those who can write, write, while others sing or read out loud. There are those who draw and there are patients who are content merely enjoying each other’s company. Though the alumni of our workshop are somewhat varied, we have our regulars: there is Pedro, a wonderful writer who speaks of the coup in the 70s, capitalism and his mother; Charles, a great intellectual who enjoys quoting Borges and Milton and always signs with his name and the date in Hebrew, and there is also Esteban, who reads pieces of the Bible every day and sings for us while calling everyone gentlemen and princesses. We have received visits from poets, writers, scholars and actors and luckily everyone found the Borda Center as interesting and rich as we did. In the year 2015, around December, we had the opportunity to gather our favorite poems in a book published by Elemento Disruptivo editora which we entitled Los que no muerden (or in English: We don’t bite).

Our journey through philanthropy and spoken word poetry has been rich and varied, and has drawn us to many different places. Through it, my colleagues and I became friends, reached many different goals and got to meet and work with amazingly interesting people. Thus, there is only the feeling left that many of our teachers were actually wrong: that literature is not, in fact, a solitary experience and that it can contrarily trigger a great net of working, creating and sharing stories and ideas. Slam, it is often said, is not only a genre but also a way of relating to one another and we feel, now more than ever, that is in fact a social deed. As Wittgenstein once stated, we grow and expand the limits of our world through the limits of language. But it is, we found, a somewhat richer and much more intense experience when shared.

Julia Kornberg is a multilingual newspaper, magazine and journal editor, currently studying literature at the University of Buenos Aires. She was the Argentinian delegate to the Girls20 Summit, meeting in Australia in 2014.